Exchange rates calculator
In case of conversion of  more than USD 25,000 or equal currency the transaction is carried out on a contractual basis, at the Bank's discretion and at the rate specified by the Bank.
An amount of 400,000 AMD (inclusive) or equivalent foreign exchange transactions is required to submit an ID.
There are no commission fees for conversion transactions.
Damaged USD and EUR banknotes as well as USD banknotes  1995 issuance are subject to a 3% commission.
Banknotes with a face value of 500 Euros are not accepted by the Bank, converted or replaced.
Farmer who fought for freedom 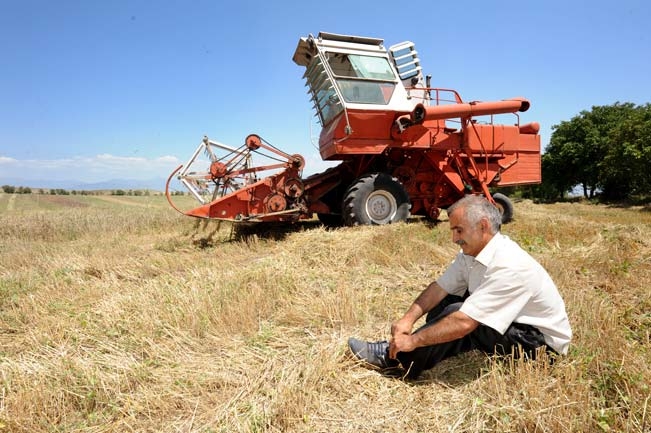 While collecting materials for the article about Vahram Hovhannisyan from Khndzoresk village, Syunik region we found out that the person sitting in front of me is a very brave individual. I didn’t know how to represent him as a fighter or as a farmer who has had success in the sphere of agriculture. In any case both of the achievements of this person are worth mentioning.

Vahram has been injured twice. Until today there are two stumps in his chest. Of course, they are not harmless, they have severe effects on Vahram’s health and because of the he nearly died twice.

The injured freedom fighter greatly needed serious medical treatment, which was quite expensive. That’s why Vahram Hovhannisyan borrows a certain amount of funds from ACBA-CREDIT AGRICOLE BANK to leave for Germany. But the funds turn out not to be enough and he creates a farm with those funds. And here we are, a decade and a half he is one of the exemplary borrowers of the Bank.

Vahram knew how to work with land since 8th grade. His father was one of the village’s combine harvesters and he loved the equipment from a very early age. That love helped him succeed.

The farmer says: “The land needs to be cultivated; land loves when you take it into consideration. Only a lazy person can complain from life when one has hectares of land”.

Vahram is an optimist. Even though the doctors told him he had 2-3 months, he has survived the bad times, it’s already the 5th year, he lives, not as a convicted, but as a person constantly searching ways out of difficulties and finding them.

There are 20 cows (12-13 of them are dairy cows), 13 calves and 9 mother pigs in Vahram Hovhannisyan’s farm. Let’s say that Vahram believes in the effectiveness of pig production. Sometimes he counts the profit that the mother pigs bring with tens of piglets.

After speaking about incomes from livestock farming Vahram tells that he grows wheat on 60 hectares of his land, which he collects with his own equipment. That is also some kind of an income.

The farmer is constantly searching something. Currently he is in the process of building a bigger barn. Vahram Hovhannisyan has read in the internet that it is possible to make gas from manure. Read and got excited. He intends to apply that achievement in Khndzoresk. He is sure that he will be able to implement that project as he has a partner like ACBA-CREDIT AGRICOLE BANK.