Exchange rates calculator
In case of conversion of  more than USD 25,000 or equal currency the transaction is carried out on a contractual basis, at the Bank's discretion and at the rate specified by the Bank.
An amount of 400,000 AMD (inclusive) or equivalent foreign exchange transactions is required to submit an ID.
There are no commission fees for conversion transactions.
Damaged USD and EUR banknotes as well as USD banknotes  1995 issuance are subject to a 3% commission.
Banknotes with a face value of 500 Euros are not accepted by the Bank, converted or replaced.
“Win the items you have purchased” raffle took place 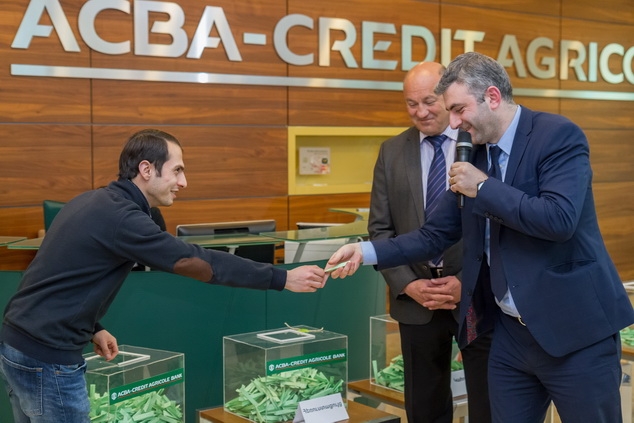 The raffle “Win the items you have bought” announced by ACBA-CREDIT AGRICOLE bank took on the 23rd of February, 2017 in the bank’s “Armenia” branch. The campaign was implemented in the frameworks of “Installment loans here-and-now” service and gave opportunity to the customers, who had made purchases from the 5th of December, 2016 to the 31stof January, 2017 via the mentioned service win the item they had purchased using the installment lending of the bank.

A raffle was held among the customers who had made purchases during the campaign. The winners were chosen randomly by the journalists who were covering the event.

In total, 20 prizes were at stake in 6 different categories. The whole process of the raffle was broadcasted online in the bank’s official website and facebook page. The winners were released from the obligations set by the trade lending agreement.