Exchange rates calculator
In case of conversion of  more than USD 25,000 or equal currency the transaction is carried out on a contractual basis, at the Bank's discretion and at the rate specified by the Bank.
An amount of 400,000 AMD (inclusive) or equivalent foreign exchange transactions is required to submit an ID.
There are no commission fees for conversion transactions.
Damaged USD and EUR banknotes as well as USD banknotes  1995 issuance are subject to a 3% commission.
Banknotes with a face value of 500 Euros are not accepted by the Bank, converted or replaced.
Armenian herbal teas to be exported to Germany: We found what we were looking for TeeGschwendner 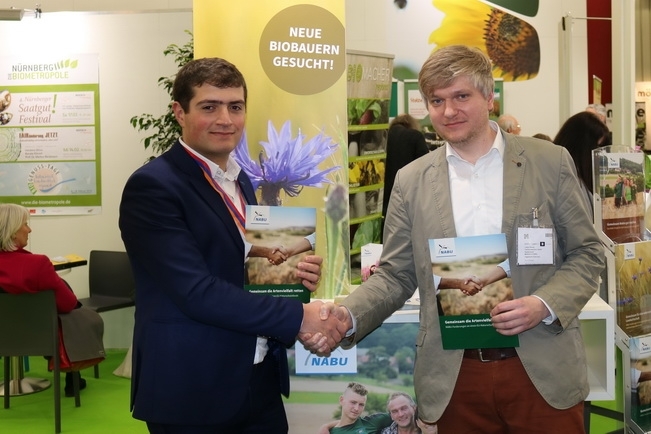 Within the framework of the Biofach 2018 organic food exhibition in Nuremberg, Germany, "Sari tei" and "Antaram" companies have signed an agreement with German TeeGschwendner on herbal tea export.

"We learned about the two Armenian companies through the Organic Agriculture program, conducted by the German Nature and Biodiversity Conservation Union (NABU) and ACBA-CREDIT AGRICOLE BANK. I think the project was a good opportunity to create prospects for both producers of organic tea in Armenia and us. The German company will not limit itself to buying tea from Armenian partners only, and counts on wider cooperation. TeeGschwendner will familiarize the Armenian partners with the standards and features of the European market, as well as conduct a training course for the employees of these companies. Together we will identify all the problems of the production cycle and solve them. This is the first project conducted by TeeGschwendne in the region. We found what we were looking for," said Lukasz Parobin, production director at TeeGschwendner.

TeeGschwendner has more than 130 specialized stores in seven countries on four continents.

With the assistance of German specialists, the beneficiaries are retrained every year. The winners of the contest and manufacturers of BIO-products have already created 50 new jobs. Seventy more jobs are expected to be created in 2018.

The program for the development of organic agriculture is carried out for the clients of ACBA-CREDIT AGRICOLE BANK.