Exchange rates calculator
In case of conversion of  more than USD 25,000 or equal currency the transaction is carried out on a contractual basis, at the Bank's discretion and at the rate specified by the Bank.
An amount of 400,000 AMD (inclusive) or equivalent foreign exchange transactions is required to submit an ID.
There are no commission fees for conversion transactions.
Damaged USD and EUR banknotes as well as USD banknotes  1995 issuance are subject to a 3% commission.
Banknotes with a face value of 500 Euros are not accepted by the Bank, converted or replaced.
The enthusiast of Armenian honey-making 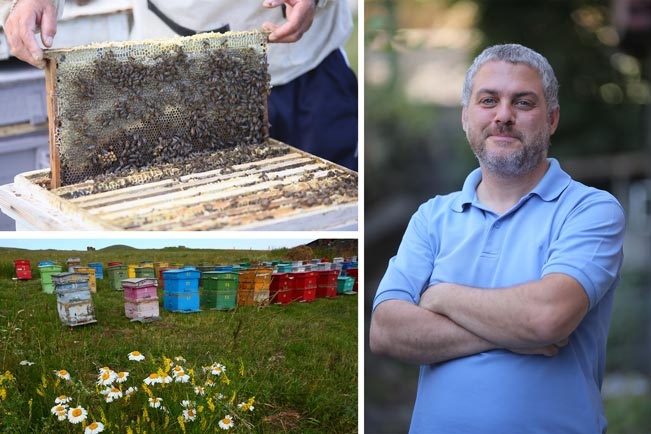 The businessman, who have arrived to their homeland continue to replenish the Armenian economy with their experience, innovative thinking and unique approaches.

One of them, George Tabakian, who was born and grew up in Lebanon, received his education and was a businessman there, sometime later decided to continue his activities in Armenia.

George came to Armenia in 2011, in 2013 founded “Mer Sarer Holding” LTD, which now is engaged in collection and processing honey from different corners of Armenia.

“I have always been interested in honey production and promotion of the honey types produced in different areas in the market. After reaching a final idea to do this, we started to examine the honey market in Armenia and the further perspectives of the production development. The process took us around one and a half years. At first it was a little difficult, the beekeepers were suspicious towards us, the sellers didn’t want to cooperate, the customers didn’t believe that our product was ecologically pure”- tells George Tabakian.

Honey itself is quite expensive, and when Honey.am was making the first steps, the company had to sell the honey almost at cost. At that time the greatest problem was to gain trust of the customers, and find a stable position in the market. Now, three years after the beginning, the company has registered quite big achievements: it cooperates with large store chains by offering types of honey which have extraordinary taste and expand year after year. The product has become quite popular. Currently, the beekeepers cooperating with the company work on the territory of Arpi Lake, Berkaber, Qarvachar, Shamshadin, Urtsasar, Haytagh, and each type of the honey carries the name of the area where it was produced.

“Of course, export was also a primary issue, as there is a high demand on ecologically pure products all over the world, and our honey meets all that requirements. In this case, our participation in the organic food certification program implemented by ACBA-CREDIT AGRICOLE Bank and NABU was very important, as we were announced winners and thanks to the financial investment of the organizers received an organic food certificate”, -told George Tabakian and added that in the frameworks of the program, together with the other winners, they have visited Berlin, Germany and taken part in Bio OST organic food exhibition, and most important, signed an export agreement with a store chain in Germany which sells exceptionally organic food.

Our meeting with George finished by talking about the future and tasting delightful cream made of honey, which is yet in the process of development. Our interlocutor mentioned that the company is ready to step forward and expand the production and cooperation with the Bank and the German company, being sure that new and broader perspectives will rise to the European market.