Exchange rates calculator
In case of conversion of  more than USD 25,000 or equal currency the transaction is carried out on a contractual basis, at the Bank's discretion and at the rate specified by the Bank.
An amount of 400,000 AMD (inclusive) or equivalent foreign exchange transactions is required to submit an ID.
There are no commission fees for conversion transactions.
Damaged USD and EUR banknotes as well as USD banknotes  1995 issuance are subject to a 3% commission.
Banknotes with a face value of 500 Euros are not accepted by the Bank, converted or replaced.
The Jukhtak Monastery now has doors 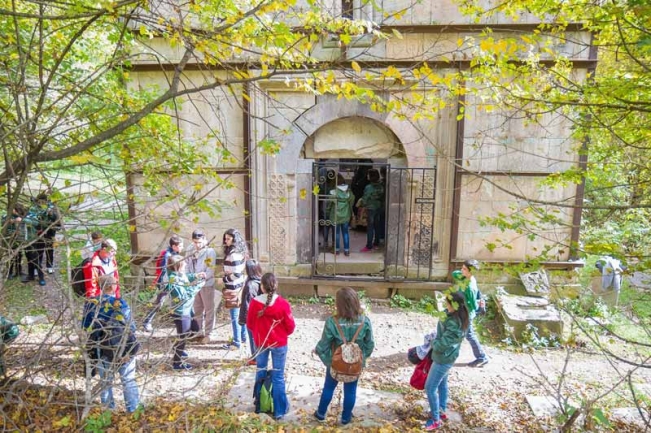 The event started with the blessing speech of Ter Shavarsh priest Simonyan and a united prayer.

In the frameworks of the program the two iron doors of Jukhtak Monastery and the two-language sign beside the church territory, which presents the history of the church, were installed. With the joint efforts of the organization volunteers and the Bank employees the territory improved, the garbage of the territory was collected and the churches were cleaned from the intertwined vegetation as much as possible.

One of the participants, Mantashyan Lidya, mentioned, that it is really pleasing when you realize that you have had your part in the protection of the Armenian monuments, which is a big problem nowadays.

Narek Asatryan, the PR responsible of ACBA-CREDIT AGRICOLE BANK noted, that taking into consideration the huge spiritual and cultural importance of preserving the national identity, the Bank have supported the implementation of such programs as much as possible. We highly value this initiative, as architecture is one of the cultural sectors that reflects the identity of our nation.