Exchange rates calculator
In case of conversion of  more than USD 25,000 or equal currency the transaction is carried out on a contractual basis, at the Bank's discretion and at the rate specified by the Bank.
An amount of 400,000 AMD (inclusive) or equivalent foreign exchange transactions is required to submit an ID.
There are no commission fees for conversion transactions.
Damaged USD and EUR banknotes as well as USD banknotes  1995 issuance are subject to a 3% commission.
Banknotes with a face value of 500 Euros are not accepted by the Bank, converted or replaced.
La Band a Tyrex French cycling show in Armenia 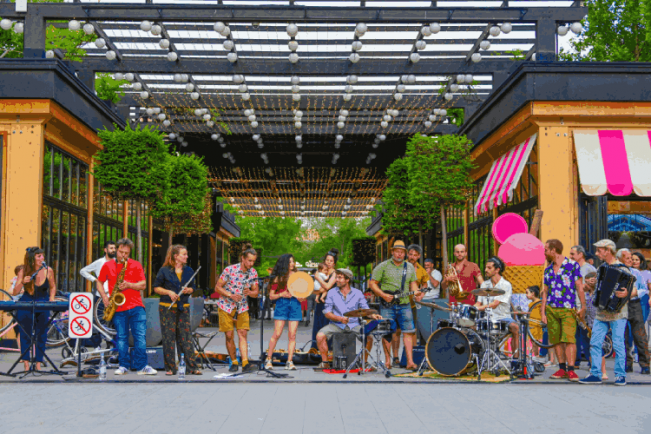 “Kakavik” by Komitas, Armenian rhythms and contemporay French art in the center of Yerevan has united everyone from young to old: “La Band a Tyrex” circus show is in Armenia.

From June 6-12, upon the invitation of the Embassy of France and exclusive partnership of Acba Bank La Band a Tyrex circus group with the seven acrobats introduces a cycling musical show in the streets of Yerevan.

The acrobatic show of the French artists and the performance of Armenian Utola group of musicians interconnect the Armenian-French cultures and symbolizes the century-long friendship.

“Embassy of France supports the spread of contemporary French art in Armenia. We introduce the new aspects of the contemporary French Art to the Armenian people in public areas. Acba bank is our partner in the implementation of this program; the bank is the all-time partner of the cultural programs carried out by the Embassy of France and it has supported the implementation of one of this year’s important events,” noted the Ambassador Extraordinary and Plenipotentiary of France Anne Louyot.

With their unique musical, dance and acrobatic performances the artists will also entertain people in Gyumri, as well as students of educational institutions and Tumo center.

More details in the video.

The Bank is supervised by the RA CB.